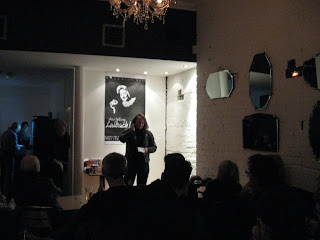 Ian and I, with the help of friends Alan Bissett and Rob Wringham, organised the first DiScoMbObUlATe comedy and literature night in Glasgow last month. Our idea is to create an experimental space for the comedy/literature cross-over, with new writers performing alongside more experienced ones.
On the first night we enjoyed work from Gordon McInnes, poet, pictured above, Kirstin Innis, an exciting new prose writer, Rob Wringham, alternative comedian, Iain Heggie, playwright, Alan Bissett, novelist, and myself. Ian compered the evening in his own inimitable style. A grand time was had by all.
Only one problem, the venue, Cabbages & Kings, a new cafe/bistro in Byres Road, was far too small for the crowd that turned up.
So we've sought out a new venue, and have opted for Mono in King Street in the city centre. The next DiScoMbObUlATe will be in early May. More details soon.
at April 02, 2008