The Death of the Pits

A day to both mourn and celebrate. 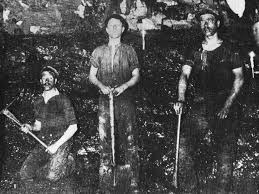 I grew up in a mining town. My grandfather hated going down the pits so much he swore he'd do anything to save his sons from the same fate. In the end my dad's older brother became a miner, and lost his hearing and his lungs to the job.
My dad went up the way instead, and became a slater. At least he had the skies to look at, even if he often got soaked and frozen.

The following poems are from my third collection, Graffiti in Red Lipstick, and are dedicated to my grandfather, and my great-grandfather who was also a miner. I never met my grandfather. He died the year I was born. Both he and my uncle loved their gardens more than anything.

Our hair is honey blond and styled,
our clothes are well-made, warm,
and on our fingers gold rings shine.

But in the memory of our bones
rickets lurks like an ache
and our lungs still recall
the hacking coughs
of grandfathers we never met.

At night in the dark pit of our dreams
we are down on our knees
tunneling, chipping
at the hard black face of the future

and even as we sit, well-groomed,
sipping cocktails in this posh hotel
there is a trace of coal dust
beneath our polished fingernails.

from the mineshaft of memory

you draw a smiling child

waiting at the pit-head gate

he did not have a garden
just a plot, to grow a functional crop
carrots, leeks, potatoes

coal castles dumped
for dirty wee rascals
to be kings on

burning in the grate
wind howling in the lum
we saw castles, dungeons
fire-breathing dragons

our parents saw money
going up in smoke
and worried lest winter
last too long
bings
once they peaked like witches’ hats
brooding, dark, they shadowed us
as we skipped to park and school